After not being beaten for 12 years, Tyson Fury wins over Wladimir Klitschko to become Heavyweight champion of the world. But even more shocking to the unbelieving audience in Germany and to the reporters is the scene when Tyson gets the microphone after the winner announcement:

British boxer Tyson Fury has given thanks to Jesus and testified that it was only by the power of the Lord that he managed to defeat Wladimir Klitschko to become the new WBA, IBF and WBO World Heavyweight boxing champion on Saturday night.

Speaking after his dramatic victory, Fury testified, “I used my jab, I used my agility. But it was with the power of Jesus that I won this fight. My Lord, my saviour. In the mighty name of Jesus I thank you.”

Fury had gone into the fight as a 5-1 underdog, with experts and pundits roundly confident that Klitschko would retain his heavyweight title.

Fury has had an unorthodox path to the heavyweight title; born into a family of Irish travellers, he was three months premature and just 1 lb. at birth. Doctors initially gave him very slim chances of even surviving birth, but he pulled through and was named after former world heavyweight champion and boxing legend, Mike Tyson.

He had to watch his father, a bare-knuckle fighter in the 1980’s, imprisoned in 2011 for gouging a man’s eye out. His father was ringside to watch his victory on Saturday night though. 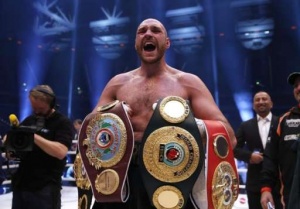 He added, “I knew all along I could win the fight. Wladimir knew, his whole team knew tonight. I saw in his eyes he knew he was going to lose the fight and he saw the new, hungry champion in me. I never took my eyes off him during the stare-off. I wasn’t fazed by the crowd because I knew I was going to be the new heavyweight champion of the world.”

“I used my jab, I used my agility. But it was with the power of Jesus that I won this fight. My Lord, my saviour. In the mighty name of Jesus I thank you.”

Thanks to Christiantoday.com for this article.