On new-year’s evening hundreds of women reported that they had been sexually assaulted in the city center of Cologne especially on the main square in front of the most famous cathedral. Reportedly men with a foreign background created a turmoil which got out of control and the police were completely overwhelmed. Men started chasing women through the streets….. BUT NOT all foreign men participated in the evil act.

The number of conflicts in this world and therewith the number of refugees is increasing. The United Nations is reporting that globally we are having 60 million refugees. This issue has surely increased to a global crisis. However, what is the Church’s response? At the end of this report, you can find a few suggestions how we can respond in a Biblical way to this challenge. BUT first…..

Find out how a groups of Syrian Refugees acted when a young American woman was in the worst of all situations:

An American woman has told how she was rescued from being sexually assaulted on New Year’s Eve in Cologne by a group of Syrian refugees.

Caitlin Duncan, a neuroscience student from Seattle, told the New York Times she had become separated from her boyfriend in the crowded square outside the city’s famous cathedral and main railway station.

She described a man stealing her hat before another “grabbed” her from behind, searching through her pockets and a third man tried to kiss her face and neck.

The 27-year-old escaped and attempted to complain to police but they were busy trying to clear the square and shoved her back into the crowd, where another group of men started groping her and pulling her hair.

“I went into a kind of fighting mode, and kicked and hit and pushed until I got away,” she said. “I was getting really scared.”

That was when she was approached by a group of Syrian refugees offering help.

They formed a protective cordon around Ms Duncan to help her through the crowd, offered to phone her boyfriend and searched for him with her when she could not remember his number.

Police guard the area around the cathedral in Cologne after reports of attacks on men of North African or Arab appearance, in retaliation for the New Year’s Eve sex assaults

The couple were eventually reunited inside the railway station, with Ms Duncan crying in relief.

Among the group was Hesham Ahmad Mohammad, a 32-year-old primary school teacher who fled Aleppo and was celebrating New Year’s Eve in Cologne with other Syrian friends who have recently arrived in Germany.

He told the New York Times he was also frightened by the groups committing the attacks, saying they had “lost their minds” on drink and drugs.

“We keep hearing news about refugees all day: ‘They are bad people, they must go back to their home,’ ” he said.

“When I hear that in the news, I am sad. Because we know that there were bad boys and bad people. But the good people, nobody speaks about them.”

Ms Duncan said she and Mr Mohammad are now friends and speak regularly, adding: “In the end it turned out really well.”

Police said asylum seekers were among up to 1,000 drunken men mostly of “Arab of North African origin” responsible for the attacks, sparking a wave of anti-refugee protests and revenge attacks across Germany.

Opinion polls show support for taking in current levels of migrants has declined in the fortnight since the assaults, while Angela Merkel has already vowed to review asylum rules and make it easier to deport foreign criminals.

A total of 751 people have filed 676 criminal complaints relating to the New Year’s Eve in Cologne, including 347 allegations of sexual assault. 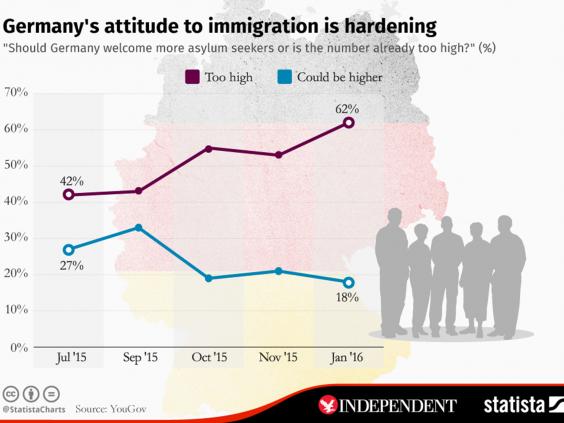 Out of 19 main suspects being investigated, 10 are asylum seekers, and the hunt for perpetrators continues.

Police have put up appeals for information in Arabic and German in all refugee accommodation in the state of North Rhine-Westphalia.

Rewards are being offered for anything leading to arrests for sexual offences, the poster says, describing “groups of young men approaching victims to rob them and commit “serious sexual assaults”.

Tensions continued in Germany today, with a public swimming pool in the town of Bornheim banning male asylum seekers because of sexual harassment complaints.

Like in any other group of people there are good and bad people among refugees. It would be a fatal mistake to judge all refugees because of the bad behavior of a minority. We would close our eyes towards those who are really in need of protection. God’s heart has always been for the poor, the foreigner, the widow and the orphan. He wants us to protect their lives – they are His valuable people, created out of love.

However it seems like many politicians seem to confuse the status of refugees and immigrants. From our observation, the governments are trying to integrate the refugees as immigrants who will relocated permanently and will not return after the crisis in their home-country has ended. We would argue that as a guest being a refugee, you would need to adopt to the local values and to the new culture. People who are not willing to follow the law and rules, seem to prefer their own value system of their home-country which suggests that they should return.

These challenges can easily escalate into tension and radicalism. We strongly believe the voice and the heart of the church is needed to guide this challenging situation. Jesus wants to reach out through us and He needs us to dare to speak the truth in love, as it says in Ezekiel:

In that day your mouth shall be open to him who has escaped, and you shall speak and be no more speechless, and you shall be a sign to them and they shall know, understand, and realize that I am the Lord. Ezekiel 24.27

Thanks to The Independent for this report including photos.