However the quotation according to Jesus is NOT: The more you give, the more you are blessed.  The poor widow offer her last two small coins, and Jesus commends that she has given more than all the  others. (Luke 21:3)

When you give your offering becomes really valuable when you have a pure motive. When God asks you to give, give freely, the amount is secondary. Did you ever consider to give your time or to give your attention. God will see your offering monetary or non-monetary. HE is the one who is more than able to bless your gift, to multiply it and to make sure it will serve its purpose.

We are not sure how Jesus regards Mark’s  donation – in any case this story is inspiring. Just remember that your offerings are not any less valuable than his.

The Facebook CEO announced the news in a letter to his newborn daughter, Max. 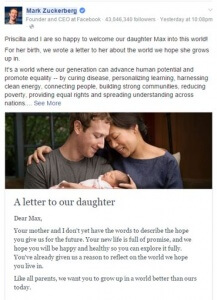 Zuckerberg and his wife, Priscilla Chan, created the Chan Zuckerberg Initiative. Its mission mimics much of what Zuckerberg and Chan’s donations have focused on in the past: personalized learning, curing diseases, and connecting people.

The move is not surprising given that five years ago Zuckerberg signed the “Giving Pledge” — along with other tech billionaires such as Bill Gates — to give away the majority of his wealth.

Zuckerberg will retain control of the majority of Facebook voting rights for the foreseeable future, and has limited himself to giving away no more than $1 billion in Facebook stock each year for the next three years, according to an SEC filing.

With the announcement, philanthropists such as Bill Gates and Bono congratulated the young couple on giving away the majority of their money.

Bill and Melinda Gates wrote in a press release:

As for your decision to give back so generously, and to deepen your commitment now, the first word that comes to mind is: Wow. The example you’re setting today is an inspiration to us and the world. We can be confident of this: Max and every child born today will grow up in a world that is better than the one we know now. As you say, ‘seeds planted now will grow.’ Your work will bear fruit for many decades to come.

Zuckerberg and Chan have already donated more than $1.6 billion to charity in the past decade, including a $100 million gift to the Newark Public School System, a $25 million donation to the CDC to stop the spread of Ebola, and a $120 million commitment to education in the Bay Area.

Bono, the lead singer of U2, said:

In these troubled times, Mark and Priscilla’s announcement today is life-affirming and will be life-changing for tens of millions of people. The scope of their commitment will be stunning to many, but to their friends it is not surprising. This is who they are. Community for Mark and Priscilla isn’t just a word, it’s a core value. I can’t wait to see what they achieve, not just with their wealth, but by their example and with their ingenuity, creativity and vision applied to some of the biggest challenges — and opportunities — of our time.