Corrie Ten Boom Knows What She is talking about.

To follow the Lord Corrie gave everything she had and which was dear to her – to the point where she only had her life and the clothes she wore.

Corrie was raised in a well-known, respected and influential family.  She was young and beautiful – yet she and her family literally gave their lives to the Lord. Today in our eyes she is a faith hero, while she said: “The real faith hero was my sister Betsy”

1,000 adults and asked: “Think back to World War II when Jews in Europe were forced into concentration camps and many were killed by the Nazis. If you were living in this time period, would you have risked the possible imprisonment and death of yourself and your family to hide Jews?” during a recent Barna survey. 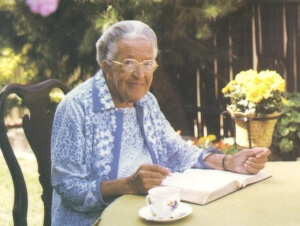 the Nazi Holocaust during World War II and, by all accounts, saved nearly 800 lives.

Corrie ten Boom was born in Haarlem, Netherlands, in 1892, and grew up in a devoutly religious family. During World War II, she and her family harbored hundreds of Jews to protect them from arrest by Nazi authorities. Betrayed by a fellow Dutch citizen, the entire family was imprisoned. Corrie survived and started a worldwide ministry and later told her story in a book entitled The Hiding Place.

Faith inspired them to serve society, offering shelter, food and money to those in need. In this tradition, the family held a deep respect for the Jewish community in Amsterdam, considering them “God’s ancient people.”

In May 1940, the German Blitzkrieg ran though the Netherlands and within months, the “Nazification” of the Dutch people began and the quiet life of the ten Boom family was changed forever. During the war, the family house became a refuge for Jews, students and intellectuals. The façade of their watch shop made the house an ideal front for these activities. A secret room, no larger than a small wardrobe closet about 30 inches (76cm), was built into Corrie’s bedroom behind a false wall. The space could hold up to six people, all of whom had to stand quiet and still. A crude ventilation system was installed to provide air for the occupants. When security sweeps came through the neighborhood, a buzzer in the house would signal danger, allowing the refugees a little over a minute to seek sanctuary in the hiding place.

The entire ten Boom family became active in the Dutch resistance, risking their lives harboring those hunted by the Gestapo. Some fugitives would stay only a few hours, while others would stay several days until another “safe house” could be located. Corrie ten Boom became a leader overseeing a network of “safe houses” in the country. Through these activities, it was estimated that 800 Jews’ lives were saved.

On February 28, 1944, a Dutch informant told the Nazis of the ten Booms’ activities and the secret police, Gestapo raided the home. They kept the house under surveillance, and by the end of the day 35 people, including the entire ten Boom family, were arrested. Although German soldiers thoroughly searched the house, they didn’t find the six Jews safely concealed in the hiding place. The six stayed in the cramped space for nearly three days before being rescued by the Dutch underground.

All ten Boom family members were imprisoned, including Corrie’s 84-year-old father, who died a few days after. Corrie and her sister Betsie were remanded to the notorious Ravensbrück concentration camp, near Berlin.

Corrie wrestles with God while Betsie responds in faith

Corrie was completely devastated when they find out that they had to live in the worst of the worst parts of the worst barrack: It was infested with fleas. Betsie’s response was full of faith and even in those circumstances she praised Jesus. Not knowing what this could be good for she trusted God, thinking that He will use those circumstances for His glory and to their benefit. She completely trusted that God would keep them safe and protect them in the Nazi concentration camp. Only a few days later, they were having their first secret Bible studies in the camp. They could read their bibles and pray freely, sharing God’s goodness and faithfulness. It was the safest place in the camp since no guard would go into this part of the barrack due to the flea infestation.

Betsie had a dream on December 15, 1944, that she would go home and the day after, the Lord took her home. Twelve days later, Corrie was released for reasons not completely known.

Being challenged to forgive

In 1946, Corrie began a worldwide ministry that took her to more than 60 countries. She spoke publicly and God had giver her a message of forgiveness to be taken to the world.  One day after her presentation a tall, blond man is making his way to her to shake her hand. In a flush Corrie is back to her concentration camp realizing that this man is one of the SS guards. “Thank  you for your talk,” he said. It is so wonderful to know God forgives all our sins, isn’t it?”

Corrie was struggling with her emotions – she had forgiven al lot of people but not him. Praying a silent prayer: “Oh God, help me to live my message, she decided to shake his hand to forgive him from her heart:

“Yes it is wonderful to know that God forgives all out sins!”