One Jewish Nazi survivor has a heart for Syrian Christian refugees. He opens up his wallet to help Christian children to flee to Poland.

We are deeply moved and humbled by this man’s action, it is only one man making a difference.

We are wondering though – where is the voice of the church in this conflict. 7.6 million Syrian were forced to flee of which 1.6 million live in Turkey and Jordan and Lebanon received 1 million each.

Political leaders are fighting about how to respond to the refugee crisis. Many (civilized) countries are not willing to take in refugees although they have signed international law ensuring rights for refugees.

What is we opened up our homes or our churches? What if we invested instead of buildings into “living stones”?

We are a sleeping giant, together we have enormous resources and a very powerful voice –  let’s wake up! Yes, we can do this for the glory of our risen King Jesus.

Be inspired by Lord Weidenfeld’s courage and life: 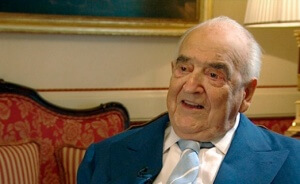 Lord Weidenfeld says he has “a debt to repay” to Christians fleeing Isis, because the Quakers and the Plymouth Brethren fed and clothed him and helped him to reach Britain in 1938.

The publisher is spearheading Weidenfeld Safe Havens Fund, which last week supported the flight of 150 Syrian Christians to Poland on a privately chartered plane to allow them to seek refuge, making them the first beneficiaries of the resettlement project.

Having arrived in Britain on a train a year before the start of the Second World War with just a few shillings to his name, Lord Weidenfeld went on to establish the Weidenfeld and Nicolson publishing business a decade later. He was made a life peer in 1976.

The 96-year-old told The Times: “I had a debt to repay. It applies to so many young people who were on the Kinderstransports. It was Quakers and other Christian denominations who brought those children to England.

“It was very high-minded operation and we Jews should also be thankful and do something for the endangered Christians.”

The fund aims to offer 12-18 months of paid support to the refugees. But the project has run into criticism for its exclusion of Muslims who have also been forced from their homes by Isis, for fear of murder, enslavement or torture. Countries including the United States have declined to participate in the scheme.

The Christian populations of of Syria and Iraq have fallen precipitously in the past decade, however, and Lord Weidenfeld defended the project’s narrow focus.

He said: “I can’t save the world, but there is a very specific possibility on the Christian side. Let others do what they like for the Muslims.”

For more background information on the persecution of our Christian brothers in the Middle East, you can watch this brave nun from Germany who is looking after the refugees. She is requesting Europe and the USA for help – which is good. However we believe it is time for the church to take a stand and look after the widows and the orphans.

On page 2 of this report you can find another video clip concerning specifically Christian persecution. However there are pictures shown of beheaded children and we would like to caution you: The pictures are shocking and horrifying.

Please share this article with your church family. We do not want to neglect our brothers and sisters and wait for non-believers to rescue them.