The Scandinavian countries (Denmark, Sweden, Norway, Finland, Iceland) are known to be progressive and to be trendsetters for the western world.

Watching these countries we can see trends which we can expect to see in other western countries soon. There are fewer Christians in Sweden (0,7%) who attend a church once a month than there are Christians in Indonesia (2%), the largest Islamic Country by population.

Followers of Jesus are often reacting in shock or despair having the tendency to retreat to church and other Christian circles. Complaining and hiding from this world however, does not change anything. We are possibly seeing the fruits of this approach: as Christians retreat, the world is developing to be less Godly.

Continue reading in order to see how a country develops when there is no active and relevant church in the society. 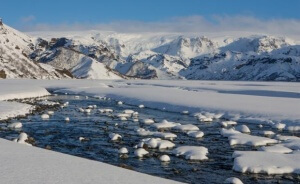 Fewer and fewer Icelanders identify as Christian While the poll found 61.1% of Icelanders say they believe in God, the share is significantly lower in younger age groups than the older age groups, indicating a continued secularization of Icelandic society. Photo/GVA.

Iceland seems to be on its way to becoming an even more secular nation, according to a new poll. Less than half of Icelanders claim they are religious and more than 40% of young Icelanders identify as atheist. Remarkably the poll failed to find young Icelanders who accept the creation story of the Bible. 93.9% of Icelanders younger than 25 believed the world was created in the big bang, 6.1% either had no opinion or thought it had come into existence through some other means and 0.0% believed it had been created by God.

People in the oldest category were also most unsure about the origins of existence, as 16.6% of those older than 55 saying they either didn’t know or had no opinion on the origin of the world.

It would be healthy to check our values and habits, asking how is our faith alive and active. We are called to light and salt for the earth and while we are not from this world we are meant to live in it. Are you living out your faith on a daily basis? Do you dare to stand up for God’s way?

Let us live trusting God – let us do the things Jesus wants us to do just as he reveals it to us specifically. We do not have to perform out of our own strength. Jesus says that His burden is light and we will find peace and rest when we follow him.

“Come to me, all you who are weary and burdened, and I will give you rest.  Take my yoke upon you and learn from me, for I am gentle and humble in heart, and you will find rest for your souls.  For my yoke is easy and my burden is light.”Mat.11.28-30

And when we follow Him, He promises we will produce lasting fruit: “I chose you and appointed you so that you might go and bear fruit—fruit that will last.” John 15,16